By David Poulson
Last week I covered the release of an animated model of an oil spill in the Straits of Mackinac.
The greatest question it prompted in my mind: Why didn’t we do that?

I’ll grant that the researcher who put that one together had studied Great Lakes currents for 30 years. Journalists aren’t going to replicate that kind of expertise.
But journalists aren’t expected to generate the data.
We are expected to find it. And now make it dance.

I’m not saying that news organizations need a fulltime information choreographer. But we need to find new ways to intensely communicate the data that drowns us all.
And if we can’t do it ourselves, we certainly can do what journalists have always done: Mine the work of others in ways that enhance public understanding.
That’s our value added. And often it’s simple stuff.

Recently Great Lakes Echo reporter Chelsea Mongeau reported on the record Great Lakes water temperatures over the past year. She used an animated graphic produced by the National Oceanic and Atmospheric Administration that reports temperatures for each day of the year.
Now that’s a data rich offering. But it also takes six minutes to run. Chelsea’s value add was tightening the animation to show one temperature each month. It may not be precise enough for scientists, but it certainly is effective at quickly snaring eyeballs and prompting the brains behind them to understand the trend.
Finding neat stuff that others create and turning it into story-telling devices is in the tradition of quality journalism. And there is plenty of opportunity nowadays. 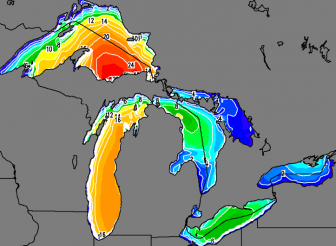 Click graphic for link to animation of wave heights during the Great Lakes storm of 1913.

Last year NOAA and the National Weather Service partnered to produce this animation of wave heights during the Great Lakes storm of 1913. It’s nice.
But journalists could run that data in a way that much better tells the story behind it.
For this is a four-day storm that sunk a dozen vessels and killed 250 people aboard them.
Integrating the time, date and place where they sunk with that animation would be a creative approach to telling a compelling tale. 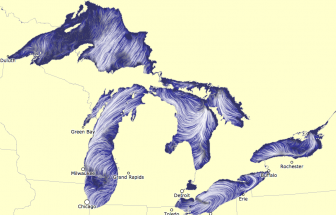 Nowadays data interpreters need to be aware of all the tools that are out there if for no other reason than to tweet links to features like this map of Great Lakes currents during a bad storm.
Smart and talented journalists with sufficient resources certainly can and should build this kind of thing from scratch. That’s the challenge. That’s the fun.
But with struggling news organizations’ need for efficiency and the sheer volume of opportunity, we must be on the lookout for leveraging the work of  talented information providers in many fields.
We need to be in the lab with scientists not only to understand their research. We must also push for a collaboration that frees data from the lab and puts it to work communicating important science to the public.
If nothing else, scientists should be encouraged to produce their data creations with easily shared embedding code. But if they won’t or can’t, journalists should certainly help with that translation from the lab to the public square.
Finding opportunities to produce such tools is work worthy of those tasked with explaining the world.
David Poulson is the associate director of Michigan State University’s Knight Center for Environmental Journalism. A version of this column also appeared in Great Lakes Echo.