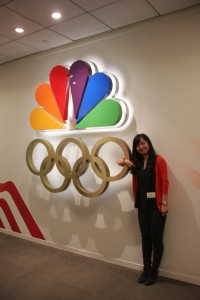 Silu Guo at her internship at NBC News.

Like many of the interns at the Knight Center’s Great Lakes Echo, Silu Guo learned plenty about Asian carp.
The fight to keep the invasive fish from entering the Great Lakes and screwing up the ecosystem certainly chews up a lot of news hole on Echo and elsewhere.
Apparently including in China.
Silu returned to China last January and finished her coursework long distance to earn a masters degree from Michigan State University’s School of Journalism this spring.
Since her return she also has been interning at news publications in Shanghai and Beijing.
Recently she emailed that she’ll soon start working at Southern Weekly in Guangzhou. She’s pretty excited about that because she says the publication has China’s only environmental section.
As it turns out, while Silu has left the Great Lakes region, she hasn’t left news about Asian carp behind. In fact, it’s rather newsy over there.
Chinese media are reporting that while people in the U.S. are trying to get rid of Asian carp, people in China don’t have enough of them to eat, she wrote recently.  “They are joking (asking) is it possible that you guys can just send those Asian carp to restaurants in China?”
I asked her to send some links to the stories. They’re all in Chinese, but she translated a headline as reporting, “How amazing Asian carps are.”
And if you sit through the soft drink commercials in this video, you’ll see a carp capture spoof that requires no translation.
What’s more, Silu says that a popular posting on the Chinese version of Twitter advises that the best way for the U.S. to control Asian carp is to accept one million Chinese immigrants to help eat them.
Writes Silu, “In China, carp is a popular dish.”
It turns out that something like that could happen, although the carp eaters would stay home and the U.S. fish may emigrate to China.  The Christian Science Monitor recently reported that a Chinese company is opening the first fishery in the U.S. dedicated only to processing Asian carp.
The company plans to open an operation near the confluence of the Ohio and Mississippi rivers to buy fish locally and process them for overseas consumption.
Don’t get too excited. Fisheries experts say that at best exporting processed carp to China could only cut the population, not eliminate it.
Editor’s note: This story first appeared in Great Lakes Echo.