The local historical society recently hosted a panel discussion of the history of the Lansing (Michigan) State Journal.
That’s my local newspaper and I was particularly interested in the event as I had once worked there as an editor. What really caught my interest in a video of the discussion was a longtime State Journal staffer’s explanation of the publication’s increasing use of metrics to measure how news is consumed.
She described how a video screen in the newsroom reports and ranks in real time the top 10 stories that people are reading online. Every week reporters get a report of how many people read their stories each day.
“We’ve been assured that this is not to judge our performance,” she said with a nervous laugh.
Well, maybe not there. But media critic David Carr says tying compensation to clicks is increasingly happening in newsrooms elsewhere.
“The availability of ready metrics on content is not only changing the way news organization compensate their employees, but will have a significant effect on the news itself,” Carr wrote in the New York Times on Monday.
Of course, this is where journalists bemoan that allowing only readers to drive the news agenda threatens to replace serious news with pictures of kittens.
Melissa Gilbert, star of the Little House on the Prairie television show, oddly enough lives near our town. The occasional stories about what she’s doing shoot right to the top of those metric measures, the Lansing State Journal reporter noted.
Should a former child star from a television show that ran from 1974 to 1982, the closest to Hollywood celebrity we get around here, decide what the Lansing State Journal’s overworked reporters should report?
Maybe not.
But ignoring reader interest is hardly a recipe for success. There is a need for a middle ground here.  Carr attempted to delineate it: “Just because something is popular does not make it worthy, but ignoring audience engagement is a sure route to irrelevance.”
I’m struggling to figure out what this means for Echo. How much should readers determine how we allocate our scant resources? We keep an eye on metrics. And here’s an interesting one: Four of the five most heavily trafficked stories on Echo since January 1 have been about Great Lakes ice.
Yet I don’t think that necessarily means we should spend most of our time reporting on the polar vortex. The popular and the important do not necessarily coincide, an important reason why public institutions need to support public service journalism.
Such support helps provide the independence needed to resist the siren meow of the cute kitten.
Carr, tongue firmly in cheek, ends his column with a picture of a cat and this observation:  “I’m happy to let the things I write stand on their own merit, and I only include the picture of this cat because it feels germane and somehow important.”
I understand perfectly.
I feel much the same about this picture. 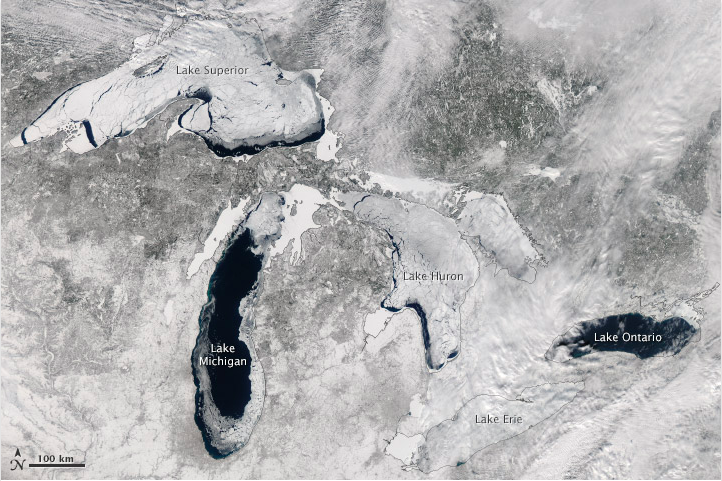 Ice grips the Great Lakes. Image: NASA
David Poulson is the associate director of the Knight Center for Environmental Journalism